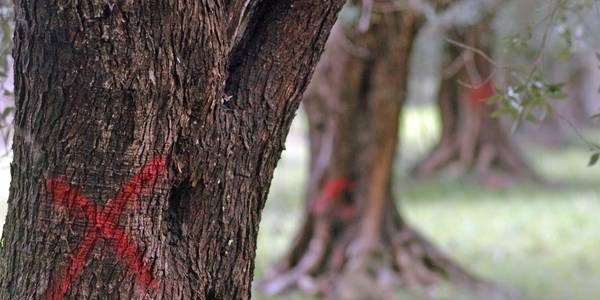 The new scientific research project in the laboratories of Professor Giuseppe Ciccarella, of the Department of Biological and Environmental Sciences and Technologies of the University of Salento, could lead to significant results in the fight against the bacterium that is decimating the local olive trees

ROME, January 30th 2017 – “This research – says Professor Ciccarella – was funded by the Puglia Region and it concerns the development of a endotherapic treatment. Plants infected by Xylella are injected with engineered nanoparticles that can gradually release an active principle for phytotherapy. The slow release serves to protect the olive trees over time from inoculation by the bacteria that are introduced by the insect vector.

This insect, the Meadow Spittlebug, acts as the carrier for the bacteria for a rather limited period of time that corresponds to the warmest months of the year. We are therefore speaking – as Ciccarella points out – of a genuine phytotherapeutic treatment that can effectively protect the plant during the period when it is most at risk, if this protection is prolonged so that it corresponds to the lifetime of the insect vector. Thanks to their microscopic size (to give you an idea of this you can think that they are only a thousandth part of the diameter of a human hair), the nano-vectors can easily travel inside all the vessels of the plant (the xylem vessels), slowly releasing the pharmacological principle over time. In this way we can protect the plant throughout the whole life cycle of the Meadow Spittlebug. If this strategy proves to be effective it will be a positive step forward in the fight against Xylella.

Currently – Professor Ciccarella continues – we are working on bacterial colonies in vitro, but we have already had some significant results, showing that the nanoparticles can be specific and can thus selectively attack the bacteria without damaging the plant. A high specificity of action would, among other considerations, allow for the use of drugs in very low dosages. This is also one of the challenges of pharmacology for humans: making drugs more and more selective as regards the organs to be treated, so that that they do not affect healthy organs or body tissues. We have the same philosophy when dealing with Xylella.”

“We are witnessing a unique scientific project that will bring substantial results, especially due to the new approach to attacking the phenomenon of Xylella,” says Giovanni Abrescia of Labozeta Spa. “The results that Professor Ciccarella has already achieved are unequivocally due to a paradigm by means of which the centrality of people is emphasized in laboratory based research, where in-depth knowledge becomes a center for aggregation and a stimulus for new ideas and new forms of experimentation. These are promising signals that, we hope, – Abrescia concludes – can become a concrete reality as soon as possible and can put an end to this dramatic scenario for the environment and for the economy of Puglia”.

Rita Levi Montalcini. A laboratory named after the Nobel Prize winner in the heart of Rome
5 January 2017